Jackie Shannon - Oysters in the Bay

Doc Frank introduced our speaker, Jackie Shannon from the Chesapeake Bay Foundation who talked about the state of Virginia oyster population.  She informed us that oysters filter water, create a habitat ....there are over 200 species, and have commercial value.  Did you know that oysters are either male or female?   They have no spine, are mollusks and bi-valve.  A single oyster can filter up to 50 gallons of water in a single day.  At one time oysters filtered the entire Chesapeake Bay in a single week.

Oysters are very picky eaters and are of two types.... seed oysters that grow individually independent from each other and spat on shell which seem to create an oyster colony. 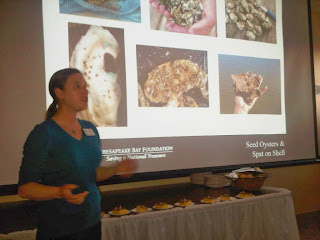 Oysters were once harvested by a dredge which did indeed destroy the environment.  In 1880 we harvested 8 million bushels of oysters.  By 1910 that total dropped off remarkably due to harvest demands.  Now we harvest less than 1 million bushels but we are growing more oysters which are great. In order to create more oysters some genius brought pacific oysters to our area but they didn't thrive here and they brought disease 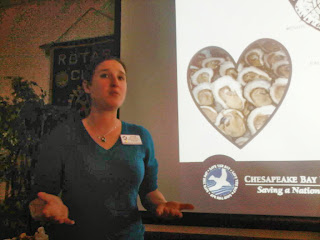 Now we are working to establish more oyster habitats..... remember the program that we had a few weeks ago?  Now the motto is "No shell left behind."  We are putting oyster shells back into the rivers and the bay to encourage "nesting" as it were.  In 2001 we raised 83,000 bushels of oysters.  Just ten year later, in 2011 we raised 530 bushels.   We seem to be doing something right.

Jackie presented a wonderful and informative program.  We thank her for her time and for the great job that she and her team are doing.  No she did not bring samples. Photos by Bob Jump - text by Tommy Neuman.