Rep. Rob Wittman is introduced by Chuck Gilchrist, program chair and thanked by Fred Woodard, Club President. Rep. Wittman is a six term Congressman. He spoke about three big themes: 1) Budget, 2) Rural Broadband Access, and 3) Education. 1) His focus on current budget situation and his proposed legislation "No Budget, No Pay Act". He wants to end Continuing Resolutions that among other consequences are producing illogical and inefficient government shutdowns. He discussed the defense budget and his work to keep it strong. 2) Education - His focus is to shift toward measurement of success based on metrics other than standardized tests; his view [is] that not every child needs a four-year college degree; 60% of future jobs won't require a four-year degree; more focus [should be] on development of needed trades and skills. 3) Much of his time was spent discussing and then answering questions about his support of and work on the "Rural Access Broadband Act" and the need for public/private partnerships in this important area. The meeting ended informally after a period of Q&A." 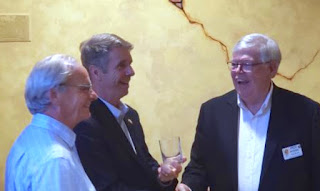 Posted by Rotary Club at 2:07 PM No comments: