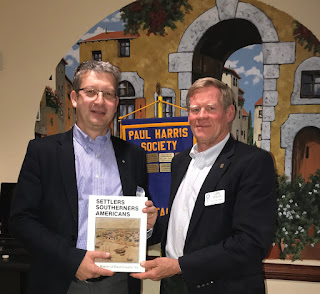 Dr. Aleš Žnidarič, President of the Rotary Club of Ljubljana, Slovenia, was a guest of the Tappahannock Rotary last week.  Dr. Žnidarič, presented a program about the Rotary Clubs in Slovenia.  The Ljubljana Rotary Club was first established in 1931, just four years after the Tappahannock Rotary Club.  In 1941 it ceased to be a functioning club during the difficult years of WWII and the following period in which Slovenia was a part of the Yugoslav Republic.  It was reestablished as an active Rotary Club in 1989 and was the first Rotary Club in the area of former Yugoslavia after the Second World War, and the third in Eastern Europe.  Today there are 49 Rotary Clubs in Slovenia conducting many charitable works in Slovenia and throughout the world.

The visit came about as a result of the Tappahannock Club's custom of beginning its weekly meetings with a toast of a club in another country.  The club to be toasted is selected based on some memorable historical anniversary or event that occurred on the day the toast is offered.   On October 26, 2017, the anniversary of the day in 1991 when the last Yugoslav National Army soldier left Slovenia and the country became truly free, the Tappahannock Club saluted Dr. Žnidarič's club.  An email notifying Dr. Žnidarič of the toast led to correspondence between to the two clubs.

Dr. Žnidarič holds degrees in structural engineering from the University of Ljubljana.  He has worked for 29 years for ZAG, the Slovenian National Building and Civil Engineering Institute, where he is currently Research councilor and head of the Department for Structures.  He is a board member of International Society of WIM (Weigh-In-Motion), and was in Washington, DC, to attend a meeting of the Transport Research Board.  He was able to extend his visit to attend the regular Thursday evening meeting of the Tappahannock Rotary Club.

Posted by Rotary Club at 2:25 PM No comments: