Saturday brought the Rotary District 7610 Governor to Tappahannock to make a visual on the ground assessment of the impact of the tornado damage in our area.  Rotary District 7610 covers 50+ clubs in the northern half of Virginia north of I-64. Utilizing the club network and the existing relationships between club presidents, Tappahannock's Club appeal to the district was echoed and promoted by District Governor Janet Brown and resulted in many clubs stepping forward with contributions – to date this exceeds $12,000 collectively from the Rotary membership across the region and many clubs have promised additional funds.  From left to right: Assistant District Governor Bill Croxton, Felton Page First Gentleman to the District Governor, District Governor Janet Brown, Fred Woodard Volunteer EMS coordinator and Rotarian. 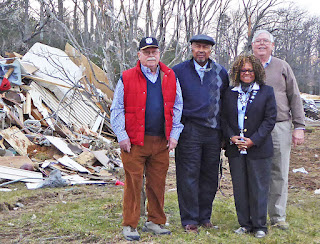